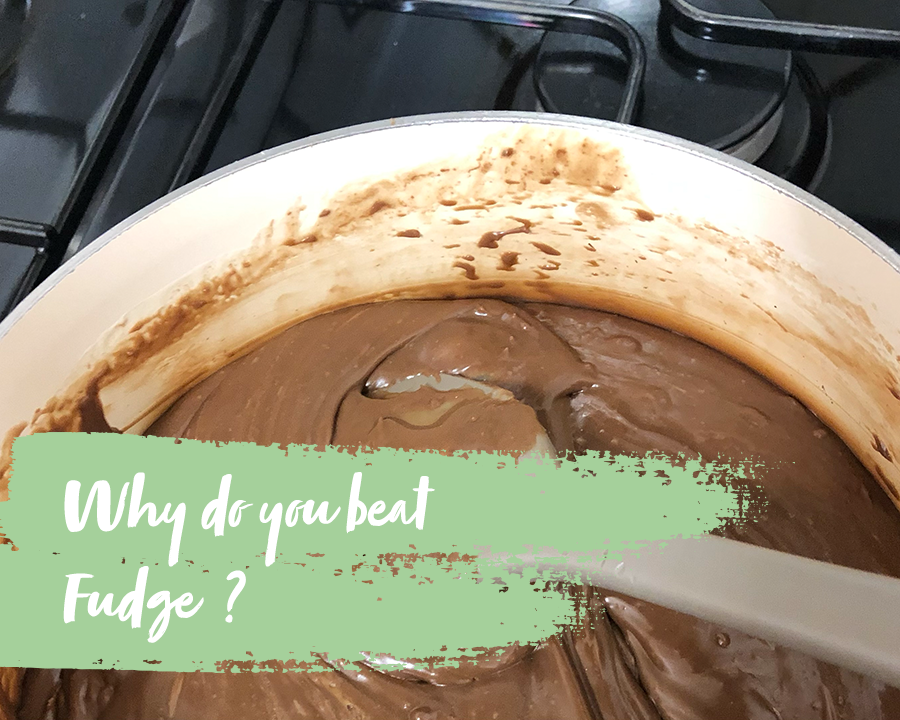 Making your own homemade fudge is actually easier than you think! There’s only a few ingredients; sugar, butter and milk, and all you really have to do is heat it up and beat the fudge! But, what do recipes mean when they say ‘beat the fudge’ and why do you need to beat the fudge? Find out in this guide!

Contents show
1 What Does It Mean To Beat The Fudge?
2 Why Do You Beat Fudge?
3 What Happens If You Don’t Beat Fudge?
4 How To Beat Fudge
5 Can You Beat A Fudge With A Mixer?
5.1 In Summary

What Does It Mean To Beat The Fudge?

After you’ve mixed together all of your ingredients, added in your flavorings and brought the mixture to the boil, you will see that most recipes call for you to allow it to cool before you ‘beat the fudge’.

So, what does this mean? Beating the fudge is just a way to instruct you to mix it up with a wooden spoon, much like you would beat eggs together.

Most of the time, beating the fudge is a difficult task, and one that will make your hands and arms hurt, or you could even end up breaking your wooden spoon as fudge can be so tough. Therefore, you may want to use an electric mixer for this part to make it easier for you.

Why Do You Beat Fudge?

Beating the fudge is an essential part of the fudge making process, and is just as important as not stirring during the cooking stage. When the fudge is cooking, you do not want to stir the fudge, as you need the sugar crystals to form properly, so beating the fudge works in a similar way.

After the fudge is cooled, you will need to beat the fudge with a spoon or mixer, as this will prevent the fudge from becoming crumbly, hard or grainy. Grainy fudge is when the sugar crystals in the fudge get too big, and you want your fudge to be smooth and with a softer consistency rather than goopy or grainy.

What Happens If You Don’t Beat Fudge?

If you don’t beat the fudge, you may end up with hard, grainy fudge that will not be nice to eat. Fudge is what we call a crystalline candy, which means that the finished end product is soft to be bitten into or to cut with a knife.

If it is not beaten, then the fudge will not be soft, smooth or creamy, and the fudge will end up really chewy, grainy and hard to eat, which no one wants!

How To Beat Fudge

To make fudge, all you need to do is combine sugar, butter and milk. To do this, you’ll need to place the ingredients in a large non-stick saucepan, and melt it over a low heat setting, stirring until the sugar dissolves into the butter and milk.

Then, you’ll need to bring it to the boil for about 10-15 minutes, and use a sugar thermometer to check the temperature. Once your mixture reaches the optimal heat, you will need to remove it from the heat and leave it to cool for about 5 minutes.

After your fudge has cooled properly, it’s time to start beating! However, if you want to have extra flavors and ingredients in your fudge, then now is the time to throw in some chocolate chips to give the fudge some texture.

Now, you’re ready to beat. This is where you stir and mix it constantly until the mixture becomes very thick and the surface starts to look rather matte in appearance.

When your fudge is ready, it should lose its shine or glossiness. If you want smooth fudge, then only beat it for about 5-10 minutes, and as the mixture thickens and comes away from the sides of the pan, or starts sticking in the spoon, it’s ready to go.

Once you reach this point, you can stop beating the fudge, and you can pour it into a mold or tray, and leave it to set in the refrigerator for about 2 hours or more until it’s the right consistency and texture.

Can You Beat A Fudge With A Mixer?

For many homemade fudge makers, beating by hand is the only way to go. Your recipe may also tell you to beat the fudge by hand, too. That being said, beating fudge by hand is no easy feat, and you will quickly find yourself tiring out or damaging your wooden spoon!

Instead, you can use an electric mixer if you wish to, just make sure that you are using the paddle attachment, and use the mixer on a medium setting. Then, simply beat the mixture until you see it thicken and lose any glossiness it has.

Just be wary when using an electric mixer, as it works so quickly that it is far too easy to overbeat the fudge and ruin it. Therefore, you’ll need to watch it as you mix and check it after every minute.

To summarize, beating the fudge is one of the latter stages of the fudge making process. Once you have boiled your fudge mixture, taken it off the heat and allowed it to cool, you can start beating and mixing your fudge until you have the perfect smooth consistency, and it loses all sheen and glossiness.

If you beat it just right, you can spoon it out onto a tray and leave it to set for the perfect and best homemade fudge you’ve ever tasted!