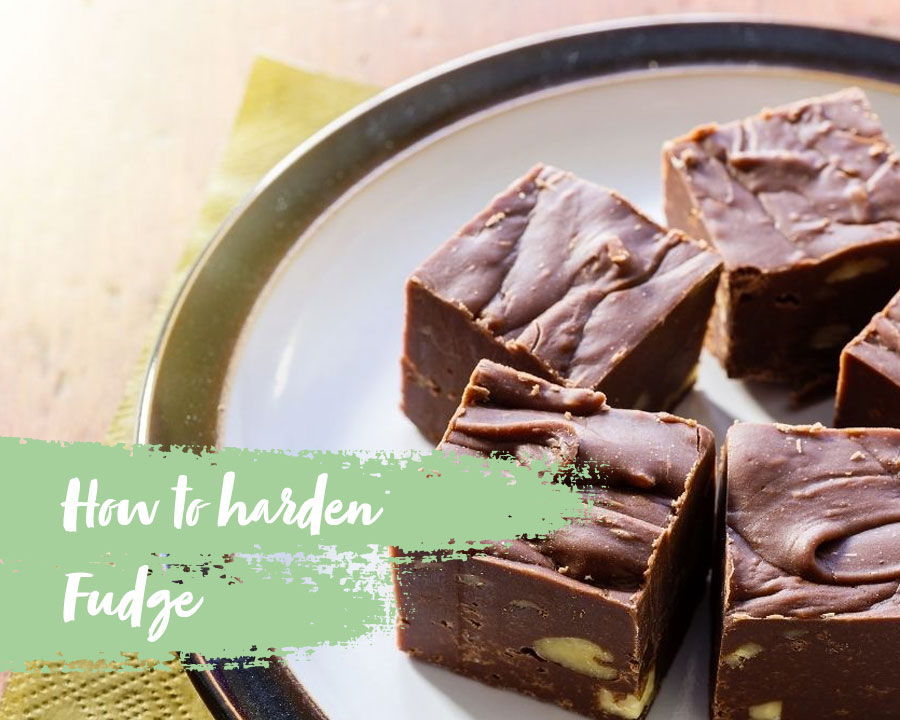 Fudge is relatively simple to make at home, especially when you’re using a quick fudge recipe. However, when it comes to making old-fashioned fudge, there can be occasions when the consistency isn’t quite right.

Contents show
1 Why Is My Fudge Too Soft?
2 A Guide On How To Harden Fudge
3 Common Mistakes When Making Old-Fashioned Fudge
3.1 Under Or Overcooking The Sugar
3.2 Using A Thin Saucepan
3.3 Letting It Get Too Hot
3.4 Not Allowing The fudge To Reach The Proper Temperature
4 Tips For Making Fudge
5 In Summary

If you’ve made a batch of fudge that is too soft even after being chilled in the refrigerator for the right amount of time, you might be wondering how to harden fudge.

In this article, I will explore some important information on how to harden fudge as well as some common mistakes you should be aware of when it comes to making homemade fudge.

Why Is My Fudge Too Soft?

Old-fashioned fudge can be challenging to make, particularly if this is your first or even second time making it. This comes down to the fact that old-fashioned fudge is cooked to a specific temperature, which is tricky to gauge without a candy thermometer.

Your fudge can be too soft for a variety of reasons, but it primarily comes down to the amount of time you spend cooking it.

Bearing this in mind, it’s vital that you get the cooking time just right to ensure that your fudge is the perfect consistency.

If you’re struggling with old-fashioned fudge, you could always try a quick fudge recipe that is made with condensed milk, as these recipes are often considered as foolproof!

That being said, there are ways to fix your fudge that hasn’t hardened as you would have hoped.

A Guide On How To Harden Fudge

To begin, you will first need to transfer the fudge back into a large saucepan with 1 ½ cups of water.

Stir the fudge over a low heat until it dissolves. Make sure that you taste the fudge mixture and see if it’s to your liking, as it’s likely that the water has probably diluted the flavor.

If your fudge needs more flavorings, add more in accordance with your taste.

Next, you will need to bring your fudge up to a boil.

You will need to ensure that you are frequently cleaning the sides of the pan with a pastry brush that you’ve dampened in order to prevent any sugar crystals forming in the mixture. Avoid stirring the fudge.

Keep cooking the fudge until it reaches the desired temperature specified by the recipe that you are using. It’s best to use a candy thermometer for this.

Remove the fudge from the heat, and follow the recipe’s instructions for cooling and beating the fudge.

As you continue beating the fudge, the fudge should thicken and lose its sheen before you pour it into the pan.

Under Or Overcooking The Sugar

As I’ve already mentioned, how long you cook your fudge will affect the firmness of your fudge.

Bearing this in mind, you should always make sure that you are paying close attention to the cooking time specified in the recipe that you are using.

That being said, as you get more experienced in making fudge, the process will become easier and easier.

If the bottom of your saucepan is too thin, the risk of your pan heating unevenly is higher and the sugar can burn much more easily.

If your sugar burns, this results in an unpleasant taste that is essentially impossible to fix.

For the best results, you should always use a heavy-bottomed saucepan. Read our blog post about the saucepans we recommend What is the Best Saucepan for Making Fudge? .

Letting It Get Too Hot

When you’re first starting to make fudge, a common mistake can be to allow the mixture to get too hot. If the butter gets too hot when you’re making fudge, it can separate as a result of this, causing the fudge to become oily on top.

While cooking fudge doesn’t always require a candy thermometer, they are useful to ensure that you remove the mixture from the heat before it gets too hot.

That being said, if you do end up with separated fudge, this isn’t the end of the world and it can be fixed.

Not Allowing The fudge To Reach The Proper Temperature

While letting the fudge get too hot is a mistake, so is not allowing the fudge to reach the proper temperature.

If your fudge mixture doesn’t reach the proper temperature, this can lead to a variety of different problems, such as the fudge not being able to set or being too sticky in texture.

To avoid this, try using a candy thermometer when you first begin making fudge to help you gauge the temperature accurately.

When it comes to making another batch of old-fashioned fudge, you should test that your thermometer is working properly. To do this, you can place it in boiling water to ensure that it registers 212 °F/ 100 °C .

However, if it doesn’t, you will need to either calibrate the thermometer or get yourself a new one. See the candy thermometers that we recommend What Is The Best Thermometer For Fudge? .

As you beat the fudge, it’s important that you pay close attention to the color and texture. Once the fudge loses its sheen and thickens, it’s time to stop beating it.

Once the sugar has dissolved and you have brought the fudge mixture to a boil, do not stir it. Stirring the mixture can increase the risk of the sugar crystallizing, resulting in a gritty texture.

Getting the consistency of old-fashioned fudge can be a challenge, as it involves cooking the fudge to a specific temperature.

Next time you make fudge that isn’t the right consistency, after reading this article you should know how to fix and harden your fudge.

You could also check out easier quick fudge recipes that involve using condensed milk, as these are often considered foolproof!